Send in the Clowns

“Hey Cheryl it’s Ethel guess what?”
“Hi Ethel, what’s got you so excited today?”
“Guess what’s at the United Center?”
“OK, I’m waiting to guess, what is it!”
“The circus!!!”
“You know I hate circuses!”
“But all the acts, the animals, the clowns are so exciting!”
“Especially the clowns, I don’t like clowns.”
“But these are special ones, the’re Okies, and they have red noses.”
‘Don’t all clowns have red noses? And what are okie clowns?”
“They’re clowns from the Ozarks.“
“Oh for God’s sake Ethel, Okies are from Oklahoma. Hey!!! Aren’t we supposed to be talking about Dale’s waterfalls today?”

With apologies to two of my favorite writers from the Ozarks.

What did Nikki see? 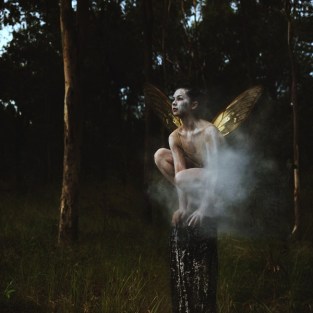 Nikki stood looking at the tree stump for a very long time. Finally she turned and walked back to where we were standing, shaking her head.
Nikki sees things other people don’t see. When I asked her what she had seen she said, “I don’t know, but she was pretty.” I’ve learned to leave it at that and not ask questions.
We went and looked at the tree stump, but didn’t see anything. Didn’t hear anything either.
It was getting dark so we found Nikki and left.

Photo Prompt Artwork by Ingrid Endel ~ Thank you to Nekneeraj for the invitation to write.

Here’s a story I always liked…

“Until the day I die, I’ll never forget those glassy, unblinking eyes.” Her last words. She has been in a catatonic state since that day.

Elizabeth Grace had been a promising designer, and her sudden decline had been most disturbing to friends and colleagues.

After graduation, she had taken a position at Albrecht’s Department Store, as an assistant window dresser. She fared well under the tutelage of Miss Bethany, and advanced to first assistant in just months. Feathers had been ruffled.

It was just after Albrecht’s shipment of new mannequins arrived that it began. Elizabeth started talking to the old ones. People noticed. She had not done that before.

Hammered by younger hipper stores and internet shopping, Albrecht’s Department Store had been in decline for years, something had to be done. When Oswalt Albrecht III came on board, all department heads had been instructed to find…